I was so excited to find the Cath Kidston Teatime book – I knew I was going to have to get a copy. Then when it came, I did my usual going through Every. Single. One. of the recipes and bookmarking the pages with recipes I wanted to try first.

Once again inspired by the Christmas season, my Plummy Puddings are a mini take-off on the Vanilla Plum Upside-Down Cake in this book.

I’d thought awhile about trying to come up with my own version of a fruitcake – while I like a cake with dried fruit in it to a point, admittedly, it’s not my favorite.

Then I found this recipe, and thought about making my version of a fruity, plum pudding with plums in it (unlike an actual plum pudding). I basically took this vanilla plum cake recipe and switched it up a bit — mix canned plums into the cake, added a touch of cinnamon, made them mini in size. And ended up with a lovely moist, “plummy” pudding-y cake that works for the holidays.

As I usually do with my mini-cakes, I made a couple dozen of these using the Wilton 12-cavity cake pop pan, then finished off by making a couple slightly larger ones using the Alan Silverwood 3.5-inch, 8-oz. mini pudding mould. If you do this, you can have the mini one-to-two-bite versions for people to have their own, as well as a slightly larger one that can be shared amongst friends at your tea party.

Starting with the plums — had fresh plums been in season, I might have used them. However, I think it’s just as well I went with the canned plums, as they were nice and mushy, so when they were added to the batter and mixed in well, you get a bite of plum with most every bite.

This also meant I had the lovely plum syrup to use as the liquid in the glaze I put on it at the end. It made the glaze just slightly rosy and added just a little extra plum flavor with the puddings.

All you have to do with canned plums to prepare them is make sure they’re pitted, then chop them roughly, small enough so they distribute well, but not so small that it’s hard to taste them. Best thing about eating these puddings is getting a nice big bite of plum.

I highly recommend using your kitchen scale as much as you can when baking. You get better proportions when you weigh, and since you can zero out what you just added, you don’t need to use extra measuring equipment.

You can just add the next ingredient in the proportion the recipe requires and get on with it.

The cake starts with a typical creaming method – butter and sugar creamed until they are light and fluffy before adding the egg and vanilla. The dry ingredients are carefully folded in so as to retain some of the fluffiness. Plums are added at the end — below is the dough before, then after the plums are added.

I used just the one can of plums this time (this was a first-time experiment, so what else is new?!), but I’d probably add a few more plums next time – maybe another half a can (4-5 more), just so they really permeate the batter in absolutely every bite and keep the cake as moist as possible.

A cooking spray works just fine to prepare the pan for the mini-cakes. Then just make sure you use something like a tablespoon (in my case I used a slightly overfull tablespoon per cavity), so they all turn out somewhat similar in size and bake more evenly.

The mini ones bake fast – in 15 minutes at 350° Fahrenheit mine were well done, and had just started to pull away from the edge of the tin.

I left a bit of room in my Silverwood pudding moulds, same preparation of just a light spray of the butter-flavored cooking spray.

They come out beautifully from the tins, and you can see the lovely big chunks of plum in the cake. If some of the mini cakes are slightly wonky on the bottom, just wait until they’ve fully cooled and you can slice off just enough so that they don’t lean.

I completely made up this glaze – it’s simply a combination of powder sugar, a little of the plum sauce and a bit of clotted cream. I had the clotted cream on hand and liked the bit of creaminess that it added to the glaze, but you could substitute a little butter as well.

My fondant holly and berries were pretty straightforward, used a couple of the plunger cutters that let you stamp the leaf pattern on the top. I had green and red-colored fondant already on hand, so didn’t have to color it. It took really very little of the fondant to make enough holly and berries for these cakes. And you can see from the photos that I use spoon, spatula, you-name-it handles to help with shaping the holly leaves to make them a little more realistic.

And there you have it – just wait until the cake is cooled, drizzle over some glaze, and add a holly and berries to your heart’s delight. A little gold luster dust on the holly and berry doesn’t hurt, nor a little sprinkle of powder sugar to look like snow (isn’t everything better with a dusting of powder sugar?) 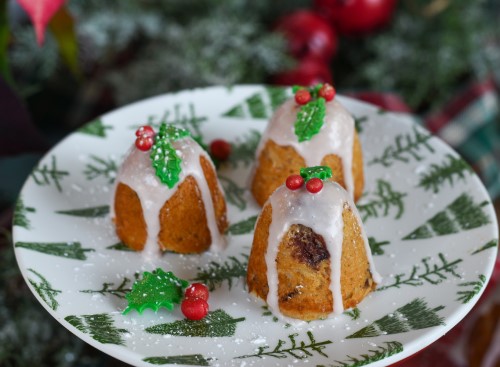 Preheat the oven to 350 degrees Fahrenheit. Sift together the flour, baking powder and ground almonds and set aside.

Beat the butter in a large mixing bowl with stand or hand mixer; then add the sugar and beat until the mixture is pale and fluffy. Add the eggs one at a time, mixing well after each one, then mix in the vanilla bean paste.

Prepare the Wilton 12-cavity cake pop pan with cooking spray or a little butter. Using a tablespoon measure, spoon in the mixture into each of the cavities. Bake in the oven for 15 minutes; will be done when a toothpick comes out clean, and the cake is pulling away a little from the side.

Let the cakes cool off completely on a cooling rack. Trim off any cake off the bottom if the mini cakes do not stand up straight.

Whisk the powdered sugar, plum syrup and clotted cream or butter together in a small bowl until you have a smooth glaze. Adjust by adding more sugar or syrup until you have a consistency that will drip down the sides.

Finish the cakes by dripping the glaze on each cake from the top and letting it go down the sides. Add any decoration you wish on the top or to the serving plate, like fondant holly and berries, finishing off with sifted powdered sugar, as desired.

And don’t forget to think about how to set up your tea table – I went for Christmas pudding china from Emma Bridgewater for my pudding, of course!