I don’t know about other full-time workers like me, but I’m always looking for ways to be more efficient with my bakes, while still retaining that homemade flavor and feel. I’d love nothing better than to be testing new bakes every other day – all from scratch; unfortunately, needs must and the day job doesn’t allow for that unfortunately!

So to make sure I get homemade bakes, albeit sometimes with shortcuts, I have gone in for the occasional pre-made mix to get me started.

For these scones, which are dominated by the flavor of cinnamon and fig accents for the dried fruit, I’ve started with Sticky Fingers Bakeries, their Vanilla Chai scone mix.

This is where one can get creative, adding additional ingredients to amp up the flavor and just make them a little more interesting. I’ve outlined how I’ve made them below, but use your imagination – instead of fig, dates, or add nuts, add more of the chai spice, etc. and see how they turn out!

So there’s no recipe in this post – one simply bakes according to instructions on the packet, adding in the amount of water noted, and taking oven temp and time from the packet.

But I did add some of my own touches to it as I mixed and assembled. At the mixing stage, I added a good teaspoonful of a tangy Vietnamese cinnamon (Penzey’s has great flavor and is one of the standby ingredients I always have on hand in my pantry). I also added several tablespoons of dried Mission figs, cut up small so the bits dispersed throughout the scones.

Once you’ve added the water and mixed it until it just comes together, roll it out (or even just pat it out to a roughly even height), and cut out the scones with your pastry cutters. I still favor the lovely UK National Trust set I got that comes with a tin. You’ll roll it out twice to utilize most of the batter; by the time I got to the last bit that hadn’t been cut out, I just formed the last scone with my hands with as minimal “working” of the dough as possible.

To finish them off, I always like to add a little chunky sugar like this one or something similar before baking. That way, when they come out of the oven, they have a nice, crusty sweet crunch on the top.

I’ve done an egg wash for scones, but for these, I wouldn’t bother – with the extra cinnamon, they are a little darker in color, and while the egg wash may have helped the sugar adhere to the top a bit, otherwise I don’t think it added much to the finish of the scones.

Then, of course, cut and serve, and don’t forget to slather with plenty of clotted cream and enjoy!

For these, I like it just fine with no jam, though something like a fig jam would have been great if I’d had one, and probably brought out the fig flavor a bit more.

Still, this gave me a delicious homemade bake that goes so well with a cup of tea, which is what I was after. So don’t steer clear of pre-made mixes, just find ones you like and make them your own! 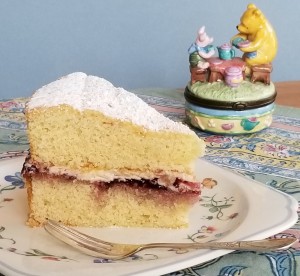