I’ve been intrigued by what teatime must have been like in Colonial America ever since I got into genealogy research, and found that it is believed that one of my ancestors was a participant in the Boston Tea Party, that he “helped to throw the tea overboard.”

And he wasn’t the only one in his family apparently; the story goes that one of his cousins was eating supper when a rap came on the window and he jumped up without finishing his beefsteak. He then came home late, uncommunicative, and in the morning a “quantity of tea” was found in his shoes and scattered on the floor.

Well, with stories like those in the family, who wouldn’t want to know more about what tea meant to the colonists? How they drank it, what they ate with it?

According to Tea Drinking in 18th-Century America (online at the Gutenberg project), drinking tea was every bit as prolific as one might expect given the British colonists would have brought the custom with them when they emigrated. It was still a sign of sophistication and civility, largely belonging to the upper classes at the time, but a great indicator of hospitality toward friend and acquaintances alike during the afternoon when taken socially.

And of course, the custom adapted to the new land, what one ate and drank for tea and with one’s tea would have been according to what was available. The tea that was imported at the time was imported from China, and sometimes wine or punch might also have been served. Various foods might have been taken – from bread and butter to cracked nuts, apples, and cakes. It’s fascinating to read more from this Tea Drinking reference linked above about the teaware that would have been used and more.

So when I ran across the Oliver Pluff & Co. tea company, I was excited to see their lines of tea, one of which features teas that would have been drank (and thrown overboard!) at the Boston Tea Party. I tried the Congou black tea first, finding it to be a nice smooth tea, with just a hint of smoke, and the flavor of apple noted in the description. The other tea that I have yet to try is the Bohea, the most popular of the colonial teas, and the majority of what was thrown overboard in Boston Harbor.

While I enjoyed the tea for itself, there is also something quite fundamental to me to be drinking the same kind of tea that someone in my family almost 250 years ago would have drunk as well. Or which became such a symbol of the War for Independence that they believed in and fought for. I’m not even sure how to describe it, except that it makes me feel even more connected with them than I would have thought.

I wanted to also pair the tea with something the colonists might have eaten, so I landed on the recipe for American Gingerbread cake from Anne Byrn’s American Cake book which dates back to that time (with some updates for today’s measures and ingredients). (The first chapter of her book, early American cakes, is posted on publicism.com, though her whole book is available at Amazon to purchase as well. And it’s one that’s well worth adding to your baking recipe collection.)

Assembling the cake is pretty straightforward. My version below includes a few tweaks from the original – I added additional spices like nutmeg, cloves, and a good bit of crystallized ginger. And while the colonists would have been more likely to simply drizzle over some cream, I made up a quick-and-easy cream cheese frosting with lemon peel, which goes so well with gingerbread. 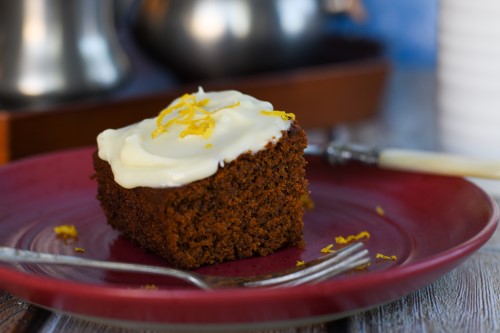 Preheat the oven to 375 degrees Fahrenheit. Grease an 8″ or 9″ square baking pan with butter.

Dissolve the baking soda in the boiling water and set aside to add at the end.

In a large bowl, combine the molasses and eggs well with a wooden spoon. Add all other ingredients except the baking soda and water; stir them well until the mixture is smooth and thick, about 40 strokes. Then add in the baking soda/water mixture and stir until smooth, or about 1 minute. The mixture will be quite liquid after you’ve added the water/baking soda; this is all right.

Pour the batter into the pan you’ve prepared with butter, and put in the oven on the middle rack. Bake until the gingerbread rises and it springs back with lightly pressed with a finger (or until a toothpick comes out cleanly), or about 35-40 minutes.

Remove from the oven and let cool on a rack in the pan for another 20 minutes before slicing into squares.

You could serve with a little cream poured over, a bit of whipped cream, or a cream cheese frosting.

For a quick and easy cream cheese frosting, combine:

Mix the cream cheese, butter and vanilla together first, then add the powder sugar. Add the heavy cream last; you may vary the amount depending on consistency you like. Finally, mix in the lemon zest. If you have any left over, or zest a little extra, you could sprinkle a little over the top after frosting the cake.

I didn’t grow up in a country with much by way of tea traditions (iced tea on the porch is about as close as we get), so I came late to the pleasures of the ritual that surrounds taking tea. Perhaps that’s why I embraced it so wholeheartedly.

Here’s where I simply want to highlight various aspects of the tea-taking tradition in all its forms and origins, and what makes it interesting for me.